The Big iPhone 5 unveiling is happening tomorrow, but here at BS we received anonymously the leaked official Apple Video that will be from the Keynote a day early. If you have seen this somewhere else than it’s still exclusive to us!? Whatever.

I just threw 8GB of 1333 mhz ram in my Macbook Pro and holy cow, the sputtering in Lion Os X has stopped. The cost for this major upgrade. $65.. that’s it! I certainly enjoy a faster PC.

Here is a 3TB hard drive on sale for $190 at newegg!! I paid $180 for my first harddrive upgrade over a decade ago and the Size of that first harrdrive…512MB thats Megabytes, not terabytes. Thats also fuckin nuts.

Every day I probably insert some kind of USB device into one computer or another, and this comic is probably the most accurate portrayal of the events that occur during the insertion process. 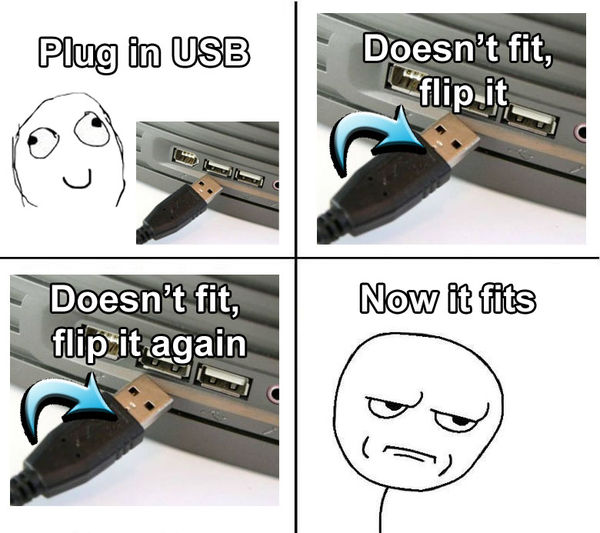 and then you have the situation that almost always happens when I want to transfer information between two devices. 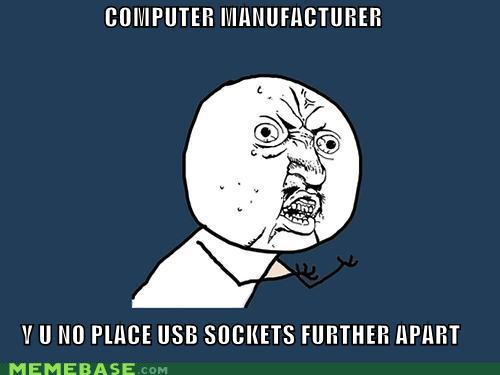 I think of these two memes whenever I encounter these common frustrations. It is comforting to know that I am not the only one who experiences these annoyances. How do you handle the additional stress caused by USB devices?

Here is the video made by an ex-best buy employee who was pissed off by the stupidity of the customers coming in on the iPhone 4, (the last model’s) launch day asking for the new iPhone, which they had not preordered. It’s pretty funny and probably pretty acurate.

PS.. I wanted to write “the iPhone 4’s launch day” making iPhone possessive, but damn apple named the new iPhone the 4s and I did not want to confuse anyone… Apple totally ruined my post.

So there is about 100 gagillion bytes to download to update all my shit from Apple, and with the slow connection at work this is taking forever. Update: I just cancelled all the updates because I’m not staying till midnight. (Sigh) Gonna have to start all over.

Here is Stephen Colbert with his funny and touching tribute to Steve Jobs. I missed the Colbert Report last night because I was busy watching the Back to Back showing of Pirate’s of Silicone Valley.

Why I just ignore them altogether.

No I am not talking about the educational system, but if you know what Steam is you understand this Demotivation and I must say it is very funny.

Plug-in can save Political Careers…

If Anthony Weiner had this Google Chrome Plugin installed, the news media would have nothing good to talk about. Made for Chrome use only it warns if you are about to make a big mistake and broadcast that small twitpic to everyone in the universe. Us smart people know how to DM though so this may not be for everybody.

*Pictures and Article Via Gizmodo